Not quite as romantic as you’d like to think…

God, was that painful. You couldn’t get a damn’ thing done. Weather-related disruptions threw a wrench in everybody’s schedules and working styles, putting already tight deadlines at risk, and putting everyone on edge. Patience wore thin, tempers got hot, and nobody seemed able to reach anyone else – by email, phone, or IM. Exasperated and feeling the fetid warmth of management’s goal-oriented, results-driven breath on the backs of our necks, Anglo and Gallic factions spent a whole lot of time bitching about each other behind their backs, with managers doing double duty as confidantes and referees.To say there was tension, would be an understatement. The political divide was pronounced, and the antagonism was clearly bilateral. Our French colleagues made precious little effort to understand or accommodate American working styles, and those of us stateside returned the favor. There didn’t seem to be the least bit of interest in resolving our “dynamics.” Confusion ruled day, in terms of how things got done, and nobody was budging, either way.

Only one thing would solve our fractiousness, as we leapt from the starting gate of the new year. The American half of the team were ordered to get our asses to Paris for a little Kumbaya, shared meals, and an all-day team-building session led by an official facilitator whose job it was to strengthen the Franco-American connection. The intent was to rally and unite us as a cohesive new organization. The only thing the experiment accomplished was keeping us from getting our work done and giving us new reasons to dislike and distrust one another, as we sat around a U-shaped configuration of tables, Americans on one side, French on the other. But it checked the “team-building” box on our manager’s goals, so victory was declared. Now that we were all in alignment, we could continue with our first quarter meetings and calendar year agendas, which now included even more trans-Atlantic collaboration.

So, less than a month later, it was back to France. 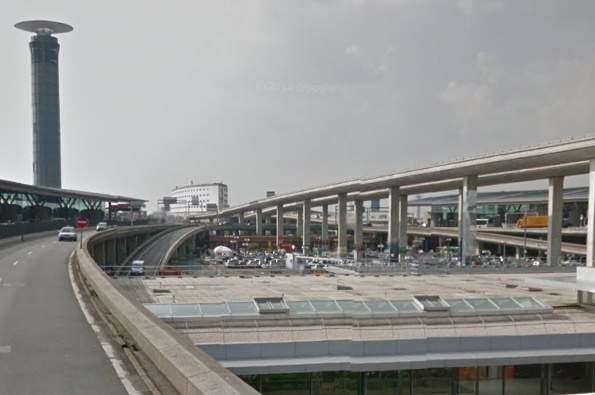 And here we are… [Source: Google Street View]

From the book Zen and the Art of Moto Taxi Survival:

When I stepped out into the blinding glare of a Roissy morning, little did I know I’d feel like a different person, by the time I got to my hotel. I was a senior web manager with one of Europe’s top technology companies, overseeing a team of 20+ associates, running projects that spanned the enterprise in 25 countries on 5 continents worldwide. When I wasn’t on conference calls with Japan, China, Korea, or Singapore, I was coordinating marketing activities with colleagues throughout Europe, Latin America, and ANZ. I was on-call pretty much 24/7, my days often started around 4:30 a.m., and the action could keep coming till around 10:00 p.m. A 40-hour work week was a nice thought, usually reserved for lulls when my European colleagues were on vacation for the month of August. That dreary spring day was nowhere near August, and there was work to be done.

I’d flown to Charles de Gaulle International Airport on the red-eye, hoping to get a jump on my meeting schedule before my American colleagues arrived the next day. This was my third business trip of the year, and it was barely March. It was also my second trip to the Paris area in less than a month. And another was in the early planning stages.

You might think this was a great thing. Who wouldn’t love going to Paris – let alone three times a year?

Looking back, it seems odd that I would feel the way I did. After working for a global corporation based in Paris, France, for four years, I’ve been stateside since March, 2014. How time flies. And how different my life is now, compared to then.

See, here’s the thing — traveling to Paris for fun and pleasure is a very different experience than traveling there for business. You’re not there to enjoy the cuisine and take long, langorous walks by the Seine. You’re going there for work.  And when you’re working in an environment where people normally fly around the world as a matter of course, it doesn’t actually seem like that big a deal. Everybody does it. A lot. It’s just part of your life. It’s just part of your regular day. Talking to people all over the planet and flying to and from to visit them, is just what you do for your work.

Looking back, the contrast between my “grounded” life now, and my life in a global corporate environment seems like night and day. They really are two different things, and “going global” doesn’t come naturally to everyone. I’m one of those people who really took to it. I lived in Europe for several years, back in the late 1980s (before the Berlin Wall came down and East and West reunified throughout Europe), and I’ve been back and forth across the Atlantic a number of times, since then. I actually grew up in a very global village — literally. We had one stoplight in town, just down the block from the little grocery store, but because there was an international agency headquartered there, you could walk down the street and encounter people from anywhere and everywhere in the world.

So, “doing the global thing” came naturally to me.

However, having to haul myself all over creation in back-to-back trips, left something to be desired.

I discuss this a lot more in the book.

Lots of noise… for just a few seconds

Free yourself from the stress of Paris traffic

Yes, you can get around Paris without getting stuck in a traffic jam…

The usual view from my hotel room. Not quite as romantic as you’d expect.

… that I landed in Paris and hopped on that moto taxi to my hotel.

It’s strange to think I used to go to Paris a lot, period.

But I did. And I have to say I’m glad I didn’t have to go this year.

Over the period of 2010-2014, I made annual “pilgrimages” to Paris for work. Politically, it was required, because company headquarters were in the Paris area, and it was important to be introduced to the “right people” — and be seen talking to those right people.

Now, sitting in my US home, surrounded by five feet of snow on the ground, it’s wild to think back about how usual it was, just to pick up and go. You got your marching orders from management, you looked at your calendar, you looked at the calendars of the people you were supposed to meet with… you made your reservations, arranged for coverage at home, and you flew to France and back. You just did it.

It was never easy — for plenty of reasons I describe in my book (don’t worry, I’ll describe them here on this blog, too, as the weeks and months go on). But you had to go… or you’d get lost in the shuffle of transatlantic office politics.

So I — and a lot of people I worked with — went.  For a few days. For a week. Sometimes several weeks. Considering how slowly decisions got made, and how easy it was for plans to go off the rails if you weren’t watching closely, it would have made more sense, at times, to go for a few months. But if you’ve got a family to support, with kids in school or other domestic responsibilities, that’s not terribly feasible.

Unless you take everyone with you. It could be fun. Provided everyone is up for it.

In any case, that’s a rare phenomenon — especially in the States. I can’t think of many Americans who would gladly pull up roots, even for a few months, and go abroad. It sounds good on the surface, but when you get into the reality of things — the different language, the different customs, the scarcity of luxuries we take for granted here — it gets a lot less appealing.

In any case, it’s Monday morning, and I’ll be heading off to work in a little bit. My life is remarkably staid and steady, these days, the bad weather notwithstanding, and my regular routine is… well… regular. I have a much better commute now, than a 7-hour flight to France, and I’m living pretty much the same way that most folks around me do.

But a year ago, this time, that was not the case at all.

And it’s kind of cool to look back on it and remember (from a safe distance) just how out of the ordinary it was.

Join me as I follow this moto taxi along the Seine. Just a quick ride, but beautiful weather

For those of you who have had enough of this snow… 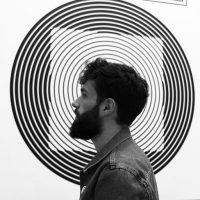