It would have saved her a world of hurt, from the start.

Plus, mototaxis rule, so…

Eight minutes of bikes rolling by

Not quite as romantic as you’d like to think…

God, was that painful. You couldn’t get a damn’ thing done. Weather-related disruptions threw a wrench in everybody’s schedules and working styles, putting already tight deadlines at risk, and putting everyone on edge. Patience wore thin, tempers got hot, and nobody seemed able to reach anyone else – by email, phone, or IM. Exasperated and feeling the fetid warmth of management’s goal-oriented, results-driven breath on the backs of our necks, Anglo and Gallic factions spent a whole lot of time bitching about each other behind their backs, with managers doing double duty as confidantes and referees.To say there was tension, would be an understatement. The political divide was pronounced, and the antagonism was clearly bilateral. Our French colleagues made precious little effort to understand or accommodate American working styles, and those of us stateside returned the favor. There didn’t seem to be the least bit of interest in resolving our “dynamics.” Confusion ruled day, in terms of how things got done, and nobody was budging, either way.

Only one thing would solve our fractiousness, as we leapt from the starting gate of the new year. The American half of the team were ordered to get our asses to Paris for a little Kumbaya, shared meals, and an all-day team-building session led by an official facilitator whose job it was to strengthen the Franco-American connection. The intent was to rally and unite us as a cohesive new organization. The only thing the experiment accomplished was keeping us from getting our work done and giving us new reasons to dislike and distrust one another, as we sat around a U-shaped configuration of tables, Americans on one side, French on the other. But it checked the “team-building” box on our manager’s goals, so victory was declared. Now that we were all in alignment, we could continue with our first quarter meetings and calendar year agendas, which now included even more trans-Atlantic collaboration.

So, less than a month later, it was back to France.

Ride with a professional… quite a lovely ride…

I was more than happy to quit traveling after three back-to-back trips. I love to travel, but I also love sleeping in my own bed in the heart of winter. Most of the nomadic enthusiasm was in the hearts of middle managers, who seemed to delight in turning their direct reports’ lives upside-down for the first three months of each year. It was expensive, counter-productive, and it came at a terrible time of the year. Every traveler had to pay out of pocket for up-front travel expenses; company credit cards were available, but reimbursement usually lagged enough to require personal funds to cover the amount.

What’s more, three trips to Paris in the first quarter was murder on project planning and execution. A full schedule in the US is not helped by a week of trip prep, followed by week-long absences from the offices, followed by another week of jet-lag – for every trip you make. To top it all off, northeastern snowstorms had an uncanny ability to coincide with my travels abroad, which put me in deep debt to neighbors who repeatedly cleared 18-24” of snow from my driveway, so I could actually reach my house on my return. And to top it all off, being away from U.S. winters was no great relief; the weather was often just as crummy in France as it was in the northeastern United States.

I’d had some less-than-stellar visits, with gray skies and damp cold, in the past. But the 2013-2014 winter was one of the most challenging ones in recent memory – and that was on both sides of the Atlantic. Winter in Paris is seldom fun, with lots of rainy, gray days, and sometimes a bit of snow. But the weather had turned nasty in a big way, dumping more snow than the Paris municipality was prepared to clear out of the way, and screwing up the flow of their already cold and gray daily grind. Several times that winter, they’d gotten not one or two, but four inches of the stuff. And without proper plows, shovels, and ice melt, the city and its vicinity had skidded to a halt. Buses didn’t run. Drivers were told to stay off the roads. People were told to lay low. Many folks worked from home, but nobody went to the office. And from home, their connectivity wasn’t great, which made communication even more of a challenge. In short, that winter sucked. 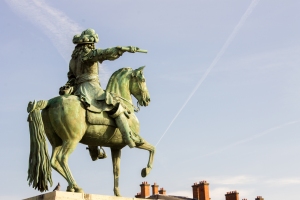